Food aid is not helping Africa’s struggle with climate change: what would?

Increased droughts, floods, and storms due to climate change are eroding African food security. New research shows that agricultural and cereal aid are not helping. The number of climate-change-related extreme weather events has increased dramatically in recent years. From the European heatwave and catastrophic flooding in July 2021, which caused severe damage and deaths in Germany and Belgium, to torrential rains, floods, and landslides in Japan, similar phenomena are occurring across the globe.

However, despite the worldwide impacts of global heating, not everywhere is being affected equally. Countries in Africa, despite being the lowest emitters of greenhouse gases both today and historically, are greatly affected by climate change. In my recent paper published in the International Journal of Environmental Research and Public Health, I studied 50 years of data from 1961-2012 on Africa. The research found that climate-change-related disasters hit African economy and agricultural production very hard, and that not all international aid helps.

Assessing the impacts of climate change on Africa

Africa is hit by a cycle of severe drought. The cycle has become shorter, and disasters have happened more frequently since 1999, when a drought occurred only once every five or six years. Droughts are now occurring at a rate of once every two years, and the damage they cause has also become more and more severe, as the following chart shows. Even last year, in 2021, many African counties suffered from drought, such as Somalia, Ethiopia, Madagascar, Angola, South Africa, among others. This is likely to continue with more and more significant disasters in the future. Africa is in a state of crisis with the rising threat of natural disasters.

According to my research, droughts decreased African GDP per capita by -7.63%, and reduced agricultural production by -24.41%. While these events are devasting to the economy at large, food security is disproportionately at risk.

Different crops were affected differently depending on the types of the disaster. For instance, drought significantly reduced the production of maise  – by 1,027,551 tons over the studied time period – as well as coffee (−81,738 tons). On the other hand, flood and storms affected fonio production, a cereal produced mainly in West Africa (−745,509 tons by flood and -51.9 tons by storm). Adapting to droughts is most important when it comes to crop production, but we need to pay attention to floods and storms as well. This decline in agricultural production and income has exacerbated poverty, especially in urban areas, as rural workers who have lost income migrate to cities.

In interpreting these numbers, we also need to consider the possibility that we underestimate the danger of the impacts of climate-related disasters. This is because some authoritarian regimes in Africa may under-report the damage caused by disasters to avoid criticism of their response, so the actual situation might be more severe than we know. One example of manipulated figures like this is Nigerian population data, which may lack accuracy[1]. This is because population estimates also have political significance and the census has a direct impact on electoral representation. Nigeria is a country where political power is highly contested, and state oversight is weak.

As these destructive events become increasingly common, it is vital – literally, for many – to ask whether the aid provided by developed countries is sufficiently compensating for the adverse effects of climate-change-related extreme weather.

Cereal food aid needs to be reconsidered. Cereal aid is provided during humanitarian crises, including natural disasters. My study found that cereal food aid reduces most crop production, such as maize (by -552,229 tons over the studied time period), sorghum (-61,476 tons), rice (-1235 tons), and wheat (-48,257 tons), even if causalities are not clear. Free cereal food probably lowers the local cereal prices and reduces local income. This likely resulted in a decrease in domestic agricultural production as farmers moved to urban cities to earn income. Also, the low prices reduce the incentive to grow cereal for farmers. This point needs further investigation with a field study on the ground.

The apparent failures of agricultural and cereal aid should not be used as reason to delay increases in aid expenditure more broadly. My research also investigated the factors reducing disasters’ impact on deaths, and found that aid specifically for human development efforts and government efficiency are essential. As the human development index and government efficiency improve, fewer people die by each improvement (-349 and -141 fewer people per disaster, respectively). This means that if the government works effectively and people have more chances for education, countries become more effective at adapting to the damages from extreme weather.

Despite the agreed Sustainable Development Goals (SDGs) target 17, the Official Development Assistance (ODA) is still short (this figure is net aid expenditure). The budget allocated to ODA by the donor countries currently represents 0.32% of their gross national income, despite a target of 0.7%.

Developed countries need to urgently increase financial aid to African countries, while investigating the issues around agricultural and cereal food aid. Lives are at stake, and the stakes are only getting higher. Not individually, but collectively and as a global community, we must support African countries’ efforts to cope with global heating.

Go Shimada is a development economist and an Associate Professor at Meiji University, Tokyo, interested in green industrial policy, social capital, and disaster recovery. He has previously served as First Secretary the Permanent Mission of Japan to the United Nations and Senior Researcher, JICA (Japan International Cooperation Agency). Follow him on twitter @shimada_go. 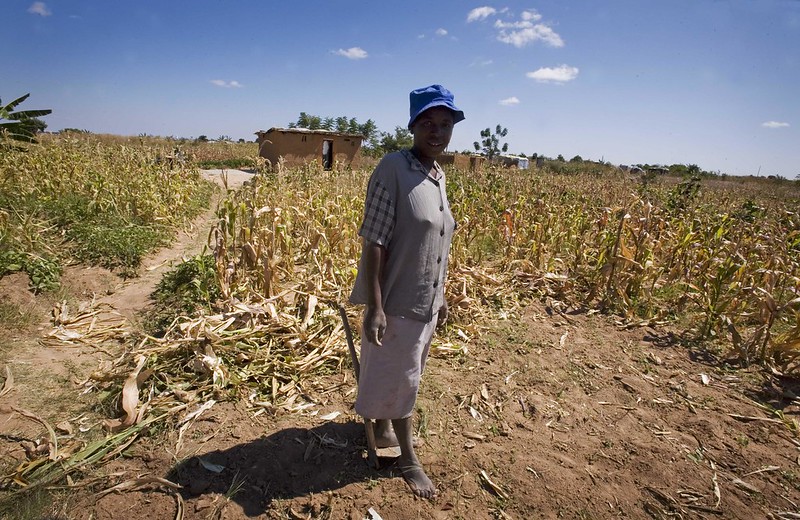 Food and the struggle for Africa’s sovereignty

Jihen Chandoul argues that post-independence clarity on the link between food self-sufficiency and sovereignty offers lessons for today.
Read article